A Model Fords, and their owners, spent last Sunday night (18th March) in Wilcannia, and had a tour around on Monday morning.

Elaine and Andrew Lever spent 30 years on “Marrapina” Station, north of Broken Hill. Their restored 1928 Ford Roadster, was down to the chaise when they were on “Marrapina” and their 2 sons put an old car seat on it and used it for a bit of fun. Since retiring to the Clare Valley Andrew has spent 2 years fully restoring the car.

Anne and Murray I’Anson have restored their 1928 Phaeton, it taking them about 2 years. Both couples are on their way to the Modal A rally in Queensland. 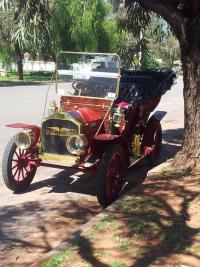 On the 30th of this month, Wilcannia can expect to see a number of old cars and bikes who are on a re-enactment of the first crossing of Australia by a motor vehicle in 1912 by the Veteran Car Club of Australia.

The Brush was a single cylinder 10hp car, and even though for long stretches such as Coolgardie to Ceduna there were no roads, only broke down a couple of times. Frank (Francis) had cycled across Australia 7 times before joining Syd and mascot “Rex”, a bull-fox terrier. By the end of the trip Syd and Frank were not talking to each other.

This time around they are due in Wilcannia on Friday 30th March and will leave on Saturday 31st March.

The owners of the Brush (see below) that made the original journey across Australia  (see photo right), were in Wilcannia enjoying a meal. More details soon.